It Happened Here -- The "Rust Belt" of Colonial New York

From the 3d quarter of the 19th century to the middle of the 20th century a broad swath of land from America's upper mid-West to the middle of New York State was America's industrial heartland. Coal was mined and baked into coke; iron ore was mined and smelted into iron and steel; and all manner of products based on iron and steel were produced here. It was only after this area fell into decline and factories were closed and abandoned that this area received the pejorative label "rust belt."

One might argue that Colonial New York had its "rust belt" too, though it certainly differed in some significant ways.

Early in the 18th century the Livingston family was looking for ways to make their vast holdings east of the Hudson river profitable.  Their enterprise to make pine tar and pitch for the British Navy had been an unmitigated failure as the white pine stands on their property were unsuited for making "ship stores".  The German Palatines they brought over were equally unwilling to sell themselves into feudal bondage and become Livingston tenants. So Livingston manor lands remained for decades undeveloped and underpopulated. Then in the swamps and lowlands that bordered the Taconic hills, part of the Berkshires, bog iron was discovered. Bog iron came from iron oxides that washed from the hills and precipitated out, over time, into these low areas. Biochemical reactions with the bog flora caused the iron oxide to accumulate in lumps and nodules of "rust".  Judge Robert R. Livingston, the grandson of Robert Livingston, the founder of the Livingston dynasty in America, built the first smelter and forge.

The first smelters at the Livingston works may have been "bloomery" forges--essentially kilns filled with charcoal and iron ore in which the burning charcoal melted the ore into a plastic mass. The carbon monoxide produced by the burning charcoal combined with the oxygen locked in ore to produce carbon dioxide, and iron. Other impurities, including carbon and silicates, tended to concentrate in pockets throughout the iron. Once the ore had been heated and reduced, it was shoveled out. Then it was hammered at a forge, reheated, folded and re-hammered repeatedly until most of the impurities were broken out of it--a process dating back to the beginning of the iron age.

Probably, very soon after the discovery of iron in the Taconic region the Livingstons invested in blast furnace technology. Blast furnaces used a larger kiln with air pumped into the base of the furnace to produce a hotter fire which melted the iron ore, facilitating the reduction process. Blast furnaces could be run continuously as the heavier molten iron and impurities called slag, could be drained out of the bottom of the furnace twice a day, and additional charcoal and iron ore shoveled into the top. Powdered limestone was added to the mix causing the impurities to form a glass-like slag. The lighter slag could be raked off the iron when it emerged from the furnace into cooling troughs, and broken up and discarded when it was cool. From a central trough formed in sand at the base of the furnace, the iron was channeled into other rectangular troughs on either side of the main trough, where it cooled into ingots. The arrangement of troughs was said to resemble a mother sow with piglets nursing on either side of her, so the iron produced became known as "pig iron."

This iron could be remelted and cast into objects such as fire backs, kettles and cannon balls. Fine grain sand was used to make a mold by pressing a wooden form into it, then pouring the molten iron into the mold.  In 1755 Robert Livingston wrote a letter to the army apologizing for his failure to deliver on an order for wagon wheels and cannon shot for the expeditions against Crown Point and Fort Niagara due to labor unrest and a border dispute with Massachusetts that caused significant vandalism at his Ancram works.  The following year he made up for it by producing 36 tons of cannon balls for the British army. 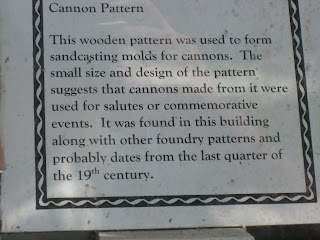 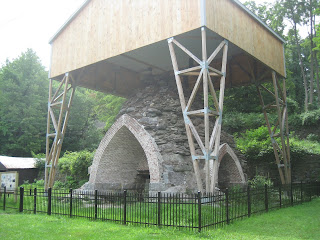 The blast furnace at Copake
Ironworks Historical District.
Built in 1825, the furnace was
last updated in 1872. In recent
years the site was stabilized and
the wood structure built over it
to protect  it from the elements.


The original bog iron was supplemented and eventually replaced by ore mined in Salisbury Connecticut and brought to the Ancram works by ox cart.  Later, hematite iron ore was discovered south of Copake by a Captain Weed. An open pit mine that would reach a depth of 50 feet was dug at the Weed Ore-bed in 1775. The following year, the Morgan Mine was opened by the Livingstons, two miles south of Ancramdale.

By 1750 Pig and Bar Iron (malleable wrought iron) accounted for most of the exports from the New York colony. On June 11, 1755 Governor William Tryon reported to the Lords of the Board of Trade in London:
There are few mines discovered in the province [of New York].  One of Iron Ore, in the
Manor of Livingston, belongs to Robert Livingston,Esq; another in Orange county, the
property of Vincent Matthews, Esq; and one in the manor of Phillipsburg. The works
belonging to the First [Livingston] are carried out to great advantage.*

The success of the Ancram forge encouraged the Livingston family to build the Marysburgh forges and the New Forge works.

The British encouraged the production of pig iron and wrought iron in the colonies because, although iron ore was mined in the United Kingdom,  refining iron used vast amounts of charcoal.  A single blast furnace could consume an acre of mature hardwood forest, converted into charcoal, in a day.
Britain did not have the forests that could sustain a sizable iron manufactory and until techniques for using coal began to replace charcoal use at the end of the 18th century, iron manufacturing lagged in Britain.  In line with mercantile theory,  Britain encouraged the production of commodities in her colonies she could not produce at home, and prohibited to the extent possible/practicable industries that would compete against her home industries. Thus pig iron could be produced and individual artisans like blacksmiths were allowed to practice their trades in America, but in 1750 rolling mills, slitting mills and steel refineries were forbidden in the colonies.  It would not be until the first part of the 19th century that small factories producing goods (mostly agricultural implements) of iron and steel sprung up in and near the Taconic region. 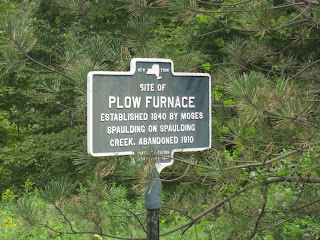 
The Ancram Iron Works continued until 1864 and were joined by the Copake Iron Works in 1845. Lead ore was discovered in 1818 south of Ancramdale when a farmer, Henry Keefer, holding a "stoning bee" with his neighbors to help him clear a new field, began turning up rocks with a metallic lustre.  Robert Livingston leased the property and ran a small smelting operation there for ten years. Then the property went through a succession of leasers and owners until 1863 when the demand for lead for bullets encouraged a group of investors to invest in equipment to profitably process the ore there. The end of the Civil War, and the collapse of lead prices brought an end to the Ancram Lead Mine.

The use of coal in smelting operations and the development of rail transportation led to the eclipsing of iron production in the Taconics.  Henry Burden developed iron works in Albany and Troy, bringing iron from Linlithco mines in western Columbia County and the Port Henry/Ironville region on Lake Champlain, and coal from the Pennsylvania coal fields**.  He, in turn, was eclipsed the iron and steel giants that developed around Pittsburgh.


Marker of the Week --The First NYSHM?
The village of Schuylerville has many historic markers
reflecting the community's colonial and revolutionary past.
The marker on the right is arguably a New York State Historic Marker--a free standing sign, made of cast iron, painted blue with raised yellow letters, but look at the date on the post! It was made a full fifty years before the first New York State issued historic markers were produced in 1927, apparently at the centennial of the battle of Saratoga, 1877.

Next week we will look at other Schuylerville markers that seem to predate State issued markers.

*quoted in  Ellis, Franklin. History of Columbia County. 1878. p.136.
**The remarkable, inventive Henry Burden will be the subject of a future post.  Ironville was featured in  "It Happened Here--The Electric State--Part I",  posted on October  8, 2013

Tom Arthur
After some 9 months of being sidelined with a detached retina I am back chasing down old New York State Historical Markers and discovering new ones recently erected, trying to tell their stories in a little wider context than the signs can themselves tell. I will attempt to post every couple of weeks--eyesight permitting!